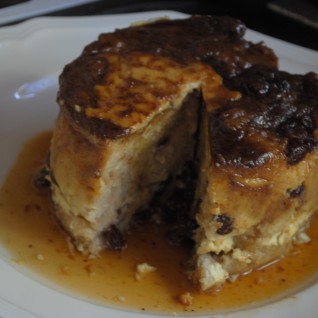 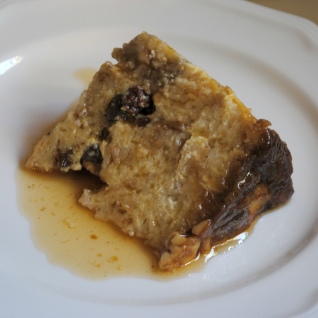 This bread pudding is a soft custard even more tender than a flan, and all of the sugar is in sauce at the bottom of the double boiler, until you invert it.  This allows a rustic mix of flavors, as the ingredients are layered into the pot, and cooked gently for a couple of hours, and then allowed to rest before being turned out.  The recipe is so simple, but I have fancied it up with Cognac, vanilla bean, and freshly grated cinnamon and nutmeg if you like.  You could do many variations: almond extract, ginger, different types of bread, bourbon instead of Cognac, dried fruits– I have been thinking about this while it simmers away. I would swoon with adjectives telling you how it tasted, but I feel like the pictures speak for themselves.  If you have ever had a good custard, or a good hard sauce, well, this is lot of flavors you may have had– but all together in layers. I had made it twice, and will be making it many more times.

This was our Christmas dinner dessert that followed an epic fresh ham roasted in the oven.  The ham came from North Carolina, and the bain marie came from Tucson.  Fresh ham is not the pink smoked/ cured things you see in the store.  Ham merely refers to a cut of meat, not the salty flavor of cold cuts after curing and smoking the meat. A fresh ham is like a big pork roast that cooks slow, has lots of healthy fat, and the most wonderful pan drippings (especially when braised with white wine). We brined the ham in fresh rosemary, garlic, onion, celery, cloves, salt and sugar. Then we roasted it for about 6 hours.

But back to the pudding.  It was quite the encore.  It is very simple.

The night before, or the morning before, take the raisins and put them in a jar with the Cognac with the lid on. Let them plump. When you are ready to make the pudding, begin to layer the ingredients into a double boiler.

place the bottom of the bain marie on the stove, fill with about 3 inches of water

pour the custard mixture of egg, milk, salt, vanilla bean over the bread– do not mix

pulling away from the sides

blogs and media about Texas

blogs and media of elsewhere

Places to Eat (not in Texas)

Places to Eat in Texas